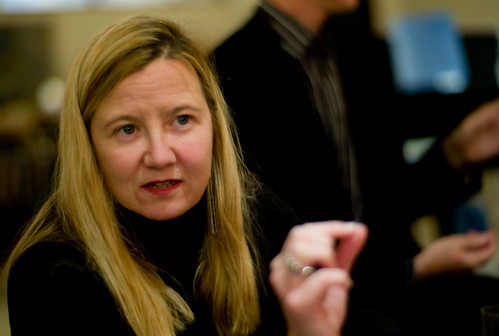 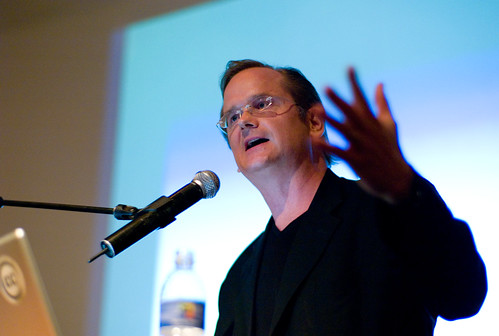 Lawrence Lessig is an American academic, attorney, and political activist. He is the Roy L. Furman Professor of Law at Harvard Law School. In 2001, he founded Creative Commons, a non-profit organization devoted to expanding the range of creative works available for others to build upon and to share legally. From Wikipedia, the free encyclopedia
blog: lessig.org/blog wiki: wiki.lessig.org

One of the most important byproducts of digital technologies, not yet really recognized, or if recognized, not quite enough, is its capacity to enable a wider range of artists to create. We don’t have a good word for these artists, if only because the proper word has been maligned by generations of a different culture. But the proper word for these creators is “amateur”–people who create for the love of the creating, and not for the money.

To us, at least us Americans, today, the word “amateurs” has a very different connotation. It connotes a second class of creators; creators who are inferior to the professional. It points to those who couldn’t quite make it as a professional, but can’t quite give up the art they’re not good enough to pursue. We think of the guitarist who tried to make it as a rocker during his twenties, and instead became an investment banker in his thirties. Or the painter who accepted the life of poverty to make her great art, till poverty became far too expensive to afford. These are people who wanted a life devoted to art,but who discovered that the market for art didn’t quite want them. They thus scorned the market, kept their love (unrequited though it might be), and moved on to something else.

Digital technologies are expanding the opportunity for these amateurs. The obvious case is the rock band, still not good enough to get a record deal, but who can sell enough digital downloads for it to make sense to keep the band going. Or the painter who can now sell digital images of her art to online card companies, who fold it into the automated email reminders that constitute the connection of modern “friends.” By lowering the cost of creating and distribution, digital technologies expand the opportunity for these artists to profit from their creativity. They still do what they do for the love of what they do; but they can practice that love more because the market for creative work has expanded. This is the obvious sense in which digital technologies have changed creativity and the opportunities for “amateurs.” And even professionals are unlikely to begrudge these creators the meager benefits that new technologies have given them.

Joi is not a photographer who couldn’t make it as a photographer. But even were he offered a job in the highest level of the photographers’ profession, I doubt he would give the idea a second thought. That’s because his professional passion has been directed elsewhere. He is an entrepreneur, and a venture capitalist. And he has been at the center of critical movements to make technology, and creative freedom, available widely. He loves his profession, and he does it well. Mornings for him do not begin with regret about who he couldn’t be.

But his success in these fields has also given him an understanding of the people in these fields. In the twenty-some years of his work, he has come to know the people of these industries (both commercial and non-profit) well. They are his friends (Joi has no enemies). He engages them as a friend, always concerned and giving, never short or impatient. He understands them by learning to see them in a certain way. He engages them with the love of friendship by learning to see them in the most beautiful, or distinctive way, possible.

Digital technologies have now given us a way to see just how Joi sees the world. By lowering the cost of access and practice, the technologies have allowed Joi to become an accomplished amateur. (There are other examples in his field for whom the same could be said–e.g., Steve Jurvetson). But “accomplished” in this context means that he has learned how to capture the person he sees. And unlike the professional photographer,who ordinarily has 10 minutes to come to “know” the person he photographs, Joi Ito has had his whole professional career. Joi knows these people. He has come to see them in their most beautiful, or extraordinary light, and he has perfected an ability to capture what he sees, and share it with all of us.

This book is the product of that extraordinary talent. In June 2007, Joi was frustrated with two things, one the product of law, the other a question of quality. The legal frustration was with the complex rules (called “copyright”) that limited the ability of websites to include photographs of the figures they discussed. Wikipedia, for example,might have some wonderful biographies of famous people, but it cannot always legally secure a relevant portrait, one consistent with the rules of copyright and the freedom attached to the encyclopedia. The other, non-legal frustration was that even if there were images that were free to use, they were usually of poor quality–both in the sense that the actual digital file was too small to be used in most media-rich contexts, and in the sense that the photograph was not very good.

So Joi sought to address these two problems through the launch of a FREESOULS project: Joi would use his talent as an accomplished photographer and his understanding of the people he photographed to produce high-quality digital images of these people that he would then make freely available, not just in the sense that anyone could download them, but also in the sense that they were expressly licensed for any use, commercial or not, so long as Joi was given attribution.

The contribution of this project will only be measured finally when we have a clear sense of how many others follow Joi’s lead. But we can already learn the lessons from this project by paying attention to this beautiful book. Joi’s main contribution is not to the mainstream media, who can now freely use these images without paying him any compensation (save attribution). His main contribution is instead an artistic one. The art here captures its subjects beautifully because the artist understands something profound about the people he captures. His art shows us their soul (freely). He understands these people, and this understanding comes from the fact that Joi Ito is not a professional photographer, but is instead a professional elsewhere, who has used the understanding he has gained there to show us the people here.

There are many examples in these pages. My favorite is the photograph of Cory Doctorow. Doctorow is a successful science fiction novelist. Most of his work has been made freely available under Creative Commons licenses; some of his best work is commercially available as well as available freely. Among his many fascinations, Cory is obsessed with Disney. The Magic Kingdom is, for Cory, really magic. Much of his creative energy has been the inspiration that place rightly inspires.

But at the same time, Cory is also an activist, often against the interests of Disney.(“Love the sin, hate the sinner,” as he puts it). For unlike Cory (or Joi Ito), Disney exercises a punitive control over its creative empire. It uses its power to get Congress to extend that empire (by stopping the public domain from reclaiming older works), and to get Courts to protect it (by suing artists who would do to Disney what Disney did to the Brothers Grimm).

Joi’s photograph of Cory captures this complex soul perfectly. The shot is from the side, looking down at a smile, or smirk–we can’t quite tell–impish and yet powerful at the same time, joyous yet driven with a passion to create. Anyone who knows Cory will recognize his soul in this free image. For those who don’t, they will be given a clue. This is art at its best, enabled because the artist is not a professional.

Beyond the contribution to art, Joi has also contributed to something important the digital community has helped create. Those who build within the sharing economy that the Internet has produced–from blogs, to Flickr, to Wikipedia–now have a free and legal way to show a certain respect to the people whom Joi’s eye and understanding have captured so well. These images can be used freely (with attribution); they are available in a quality that makes them usable in print as well as online; they come bundled with a model release that assures their free use, anywhere. This is a free gift to many who could pay for it, no doubt. But it is an extraordinarily valuable gift to many who could not, but who still want to create.